It's been quite a time since the last post and the thing is that i have so much do to and to talk anything related to the Magnavox Odysssey, like for example: I must have crap in my eyes to never notice that on the box of the Odyssey, there is not one but two prototype overlays.

They are Tennis and Hockey: judge for yourself! 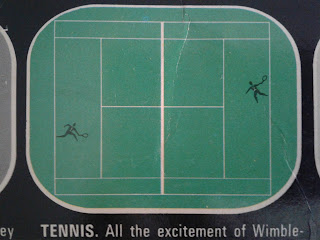 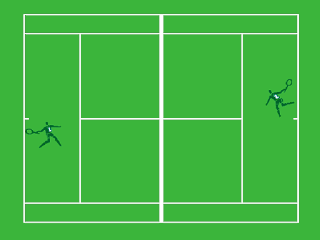 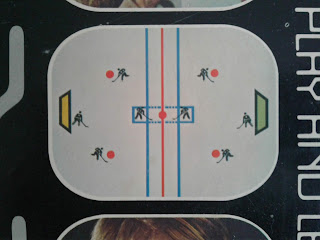 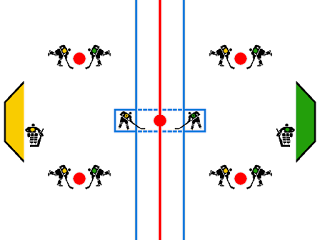 And as for Hockey, you can really see the difference! On the prototype overlay, there is only 6 players and 2 gollies which looks a regular players than gollies, also notice the nets, the black border is thicker and for last, both player in the middle has #1 and #2 and in the released overlay, both these players have #0.

The prototype Hockey overlay is shown in some pamphlets, on the Odyssey box, and also in the 1972 & 1973 commercials. Er...what the heck happened ?!?

So if you've read Kate's article, then now you know that there is not two but more than two overlays which exists as prototypes. So i also did my own research:

In the Magnavox Odyssey Promotional 1972 video (which last more than 5 minutes), i have notice that all the overlays are the same as the ones released except for one: Hockey as this one was installed on the TV inverted (lol!!!). But in the 1972 commercial, now this is where it takes the cake: Almost all the overlays shown in this commercial are prototypes or variations. Let me explain:

But the weird thing is...how come the 1972 commercial has so many different overlays and the Promotional 1972 video has the same ones as the released versions ??? Looks like they made the commercial before the Promotional...which i still don't understand why ?!! Now this is what i call a "WTF" dilemma!

But there is other prototype overlays, like the ones for the "Skill-O-Vision" (the previous name of the Odyssey) which are almost the same (or are the same) as the released version but they are all transparent and blue only. And also the game Ski, this game was supposed to have two overlays but they drop the idea....and this one is another story to tell.

So until the next post (which should be real soon), take care and keep in touch! =)

Yo, first time commenting here so hi, firstly awesome for restoration and preservation, anyway I started researching about unreleased overlays back in 2017 and I found a few myself, Table Tennis actually had a few unreleased variations of overlays, also there is a Futbol one with no player images on it, anyway I'll link to one resource with artwork images showing some of the Table Tennis ones, the Futbol one is also there near the bottom (for verification):
http://www.pong-story.com/odyssey.htm
Also I'm linking over to the page on my site with the ones I've personally recreated, most of the Table Tennis ones I know of are recreated, never got around to the Futbol one though, anyway this is the link if you are interested in the recreated ones:
https://www.alwaystheregaming.com/restored-gaming-content-magnavox-odyssey-1-overlays-unreleased-recreated.html

Yo and Hi GreatJustinTheDarkNite and thanks for the kind words. I've been collecting video games for the last 20 years and i have never saw an overlay for Table Tennis and Magnavox never made one. Don't want to burst your bubble but all those Table Tennis screenshots are color variations to catch the eye of consumers back then as some vendors/sales whatever that a black&white game is less attractive than a color one (which is true), so they intentionally added a color as background for Table Tennis (false publicity!!).

If you check the advertise flyer for the Italian Odyssey clone (G.B.C. Italiana Odissea), Ping-Pong (aka Table Tennis) has a blue background and red spots! We all know that the Odyssey never outputted colors. (http://www.retrocampus.com/wp-content/uploads/2012/10/099.jpg)

And for the Futbol overlay with no players (Overkal manual page 15), if you read the manual, it was intentional to explain the rules of Futbol (Soccer).

And thanks for the link, even if those aren't official prototype overlays, i might add some or all to the Table Tennis simulator for more fun playability. 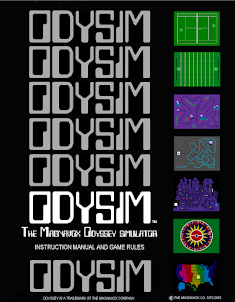 All downloads at Archive.org